if your oil starvation theory works out I"d have to say the oil pump went out, BUT, that would likely indicate a top end problem at the same time or before in my opinion. maybe a kinked oil line, but i"m sure you would have mentioned an event that could have caused that..... 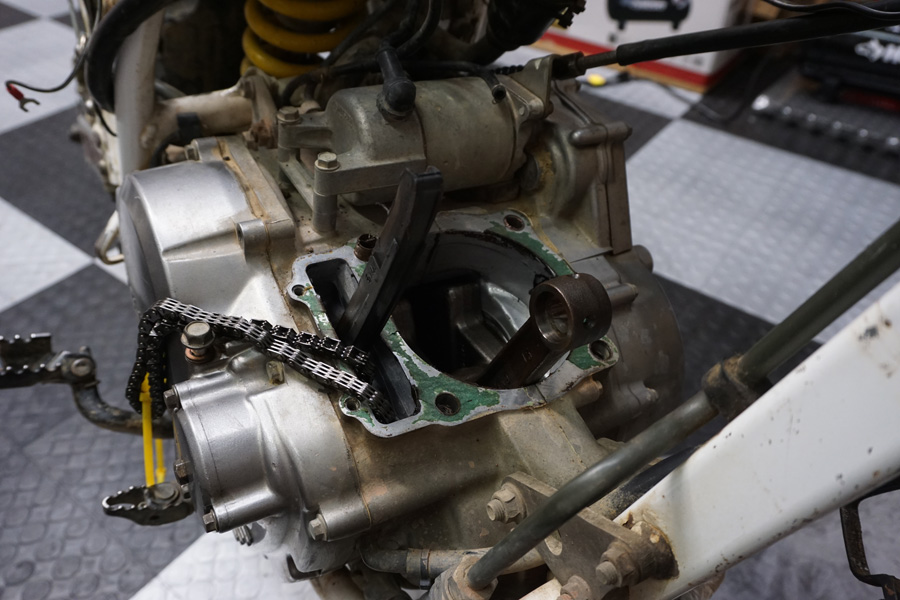 [Originally posted on our ThumperTalk blog]How much does it cost in total to rebuild the bottom end or your four stroke dirt bike engine? This is a topic that I see over and over again and I decided to take it head-on. A few more questions need to be asked before we can properly answer how much it costs to rebuild. Are you going to let your wallet get roosted at the shop and trust that the mechanic does their job? Are you going to brave the tool box and do the rebuild yourself? The bottom line is if you want to save money and be sure that your bike is well taken care of the answer involves a portion of both...

To begin I wanted to get a concrete idea of what shops are charging across the country to do a bottom end rebuild / full rebuild, top end servicing, and other various maintenance tasks. This includes what the OEM dealers are charging and recommending as well as the non-dealer private shops. Along with the OEM vs. Non-OEM differences, I wanted to see if there were any variations between geographical regions. I promise you, this experiment was nothing short of interesting.

Along with getting quotes for servicing my four stroke dirt bike engine, I wanted to see what shops were recommending when it came to service intervals and part replacements. The best way to do this was to introduce myself as a new rider who just bought an eight year old bike. In my eyes, new riders are the most vulnerable to being mislead or price gouged so they would be a perfect subject to use for the call. I also assumed that shops would be more willing to answer my “beginner rider” questions because it ensures that they help new riders get going in the sport, as well as want to come back to their shop come service time.

Once my bottom end questions were addressed, I proceeded to ask about the top end and how often the piston should be replaced. I inquired about the price of top end services and what that service included. I also asked specifics about the inspection of cylinder head and if the valves would ever need to be replaced.

Naturally conversations shifted and answers completely shocked me, thus making a simple side-by -side comparison of all the shops’ answers impossible. So for your enjoyment (or dismay) the most fair and accurate way to present this information to you is to go through each individual shops’ conversation with me, summarize them, highlight their price, and recommendations. Prepare yourself for the good, the bad, and the downright ugly.

The service department asked me a few questions about the top end and if there was any damage to the bike, they then inquired if I wanted the top end just “freshened” up.

I said no, there was no damage to the bike. I stated again that since the engine had so many hours on it I was worried about how long the bottom end would last.

What are my thoughts on this conversation? Out of all the shops I phoned I felt like this one may have been the most fishy. No other shop I called willingly let me talk them into rebuilding my bottom end and they all told me it wasn’t necessary. My conversation with the service department was very quick and they didn’t have much advice for me, but were still willing to do the work. “Many, hundreds of dollars?”, a full rebuild will most likely cost over 2000 dollars. I don’t think the right questions were asked on their end about the maintenance history of the bike, the price was misleading, and from what I gathered they didn’t have much experience working on this particular model.

I questioned him on the need to do the crank bearings and he immediately said, “Not necessary, not necessary. I’ve got an 02’ myself and it has the original crank in it.” He then went on to assure me that all the problems come from, “...top-end stuff. Valves and pistons, not crankshafts.”But then he immediately contradicted himself and told me someone he knew blew a crank out, “But to predict it and just throw a crank in because of maintenance, that’s all up to you. That’s a couple thousand dollars worth of work.” Instead he suggested doing a valve adjustment instead, “With a valve adjustment we could tell what size shims are needed to adjust the valves and from there tell how much wear and tear is on the top end.”

I then asked if there truly was no way to know when a crank will blow out and he said, “It’s more about maintenance, making sure the oil is clean, and things like that that take care of the bottom end. If you blow a clutch up and don’t clean out the bottom end properly those pieces can contaminate the bottom end and cause other problems. If you’ve been taking care of the bike and changing the oil then the bottom end should be fine.”

He then told me that the piston needed to be replaced every 15 hours of riding (per the factory service manual recommendations). He then offered to do the valves for me, but said we might as well get a new piston in while we are at it. I asked him how much this would cost and his reply was, “Depending on what’s going on you’ll spend 500, 600, or 700 bucks. I’d say I’d have 500 to 1000 ready to go depending on what’s wore out. You know 700, 800 bucks is usually pretty close.”

What are my thoughts on this conversation? I honestly think that this shop was the best out of all the shops I spoke with during this experiment. I think the service guy did the best he could to help me, however there were some contradictions and errors with the advice he gave me. One of the troubling things I found that became a theme throughout my conversations is the bottom end rebuild question. All the shops were adamant that it was not necessary to replace the crankshaft or bearings, yet as highlighted in this conversation even the service guy knew someone who had a bottom end let loose. So as consumers the question has to be “should the bottom end ever get replaced or not?" The case for a bottom end rebuild is dependent on the type of riding that is being done, so questioning the rider on their type of riding is imperative to answer it correctly.

The service man’s general info on maintenance and the repercussions of not maintaining the oil and air filter are spot on, along with his input on valve maintenance. The shop rates, although they fluctuated throughout our conversation, I believe are in the ballpark for what someone should expect to pay, since the amount of work needed on a top end can be minimal or significant depending on the condition of the engine.

I introduced myself and my bike, as well as my concerns about servicing it after 200 hours, as usual I asked for a full rebuild, raised concerns about the bottom end, and if the crank needed to be replaced.

Cue my mind exploding. Then he went on to tell me that if I just bought it, I need to get it done regardless, “Because you know, I think something in there is aluminum on the older models and they heat up and not hold up and then you get the cherry red exhaust pipe. That’ll end up messing up your head.”

I introduced myself and my bike, I asked about the bottom end needing servicing, what it might cost to service the piston and the valves, I also told the guy I was trying to familiarize myself with maintenance schedules.

The shop guy told me that the best way to know for sure would be to bring it in and have them take a look at it. He took a moment to speak to the service department and then another guy got on the phone with me to tell me, “You don’t have to check the bottom end at all. It’s usually all top end stuff. Unless your bottom end is going the only way I can check that out is by tearing your motor apart. And there’s no reason you should be tearing your motor apart.”

I asked again about piston replacement and he told me that it would cost $1000 to $1500 minimum. What? He told me, “Yeah, because I have to tear down the top end of your motor and rebuild it.”

My thoughts? The service man on the phone was completely rude, asked a few of what I consider the right questions, and then gave me an awfully high price to rebuild my top end. I wanted to know more about what his top end overhaul entailed, but he clearly didn’t have time to help me, cutting the conversation short. I would think it would be difficult to attract business if he acted that way all the time to his potential customers.

After introducing myself and my bike, asking about the bottom end, the piston, etc. the guy told me to just take it to a Honda dealership. He said there was no way of checking the bottom end without tearing the engine down. He informed me that with approximately 200 hours on the thing,“I wouldn’t be that concerned about it.” He prompted me again to call a Honda dealership to get more maintenance interval information, but that his shop could perform any of the work needed.

I introduce myself, my bike, ask my gamut of questions. The shop guy tells me, repeatedly, you can’t check the bottom end without removing the top end.

So I ask about the top end and tell the shop guy, “Well the previous owner said he did it every 40 hours and there are about 20 hours on it since he last did it. Was his service interval right or should it have been done more or less?”

He asked about the type of riding the last owner was doing, two points for th